You are here: Home / Storytelling / The Nádleehi Twins 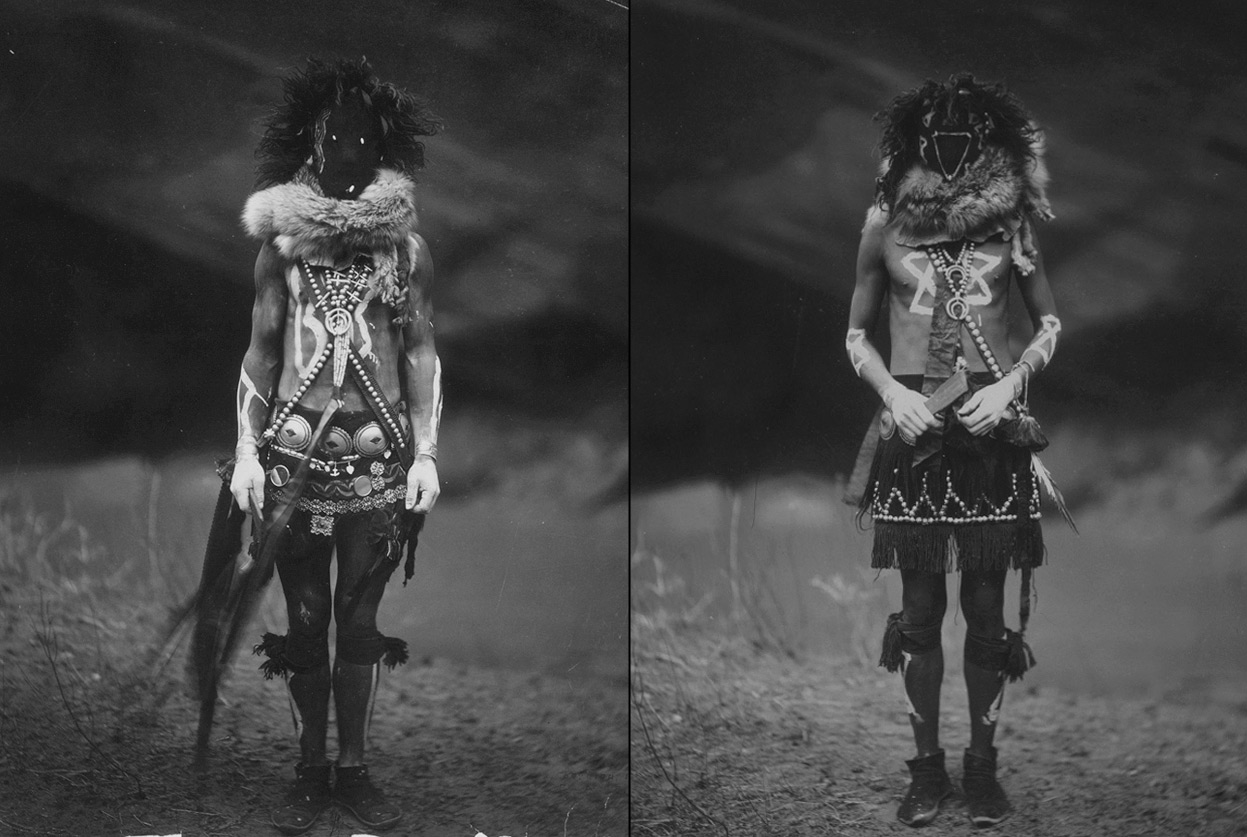 The important parts of this Dine origin story were first told to me by Howard Bad Hand, The Most Interesting Gentleman In The World, who was a regular at my restaurant in Taos, NM. We were both horse drunk on free Italian wine during one of our many after-hours conversations spanning the I Ching, Don Quixote, the Sun Dance, and UFOs. I might be making this whole episode up. He acknowledged it was 2nd hand from his perspective, but thought I would take the story to heart when I was still coming out of the closet as a gay man. Regardless, this is one of the best stories I’ve ever been told.

In the world that came before this one, First Man and First Woman walked together. They birthed the twins who started the human race. However, the firstborn of First Man and First Woman were androgenous twins. It was not their destiny to marry, as they were barren. Their names were the Turquoise One Who Changes and the White Shell One Who Changes.

When the world was destroyed by floods, The People who survived fled through a crack into this world. This is the world that we, for the time being, call home. A short time after that terrifying escape is when this story happened.

The People fled through a small crack in the sky that Coyote said he saw birds flying through, which was a portal into this world that we call The Sipapu. This new world is much larger than the world below that The People crawled out of. It is so surprisingly large that when they emerged, First Man and First Woman sent the four fastest runners for 10 days to the North, South, East, and West.

Each of the scouts returned on the appointed day saying they could have ran for 20 days farther without seeing an end to this world.

Losing no time, The People decided to make their village between the mountains and a valley. The First People planted grain in the valley and in the mountains they diverted fresh water to irrigate the fields. This was hard work, but everyone pitched in because a village needs water and food all year.

The People wished to be alone in the new world, but they were not. Coyote The Trickster had also emerged. The People knew this, since it was Coyote who had shown them the way to escape. They did not forget that it was also Coyote who had caused the Great Flood in the first place! But Coyote had come through The Sipapu, along with all kinds of Monsters, and nothing could be done about that.

Coyote, The Monsters, and The First People did not belong in this world, but all of them made the best life they could. The Monsters had not been seen again, so The People tried to forget about them. Coyote The Trickster had asked for nothing in return… so far. But this made The First People uneasy, for they knew his nature better than their own.

Before the harvest, the great beavers of this world made a dam upstream leading from the mountains to the village. The flow of water slowed to a trickle and the crops started to die. Many of The First People died of thirst before the great beaver dam could be cleared and the water source restored.

During the time when the crops were dry, fire swept through the valley. Many had escaped the Great Flood only to die of thirst and hunger the next winter. The survivors knew someone had to be appointed to protect the water supply in the mountains to keep it clear and flowing. Another person would have to spend the season in the fields below, guarding the crops.

Even though everyone understood that each task was essential for the survival of all, no one was willing to take responsibility for the water above or for the fields below the village. You see, they all had their own families and newborn children to care for. Not a single one of them could imagine abandoning their own family for months to travel miles away from the village when dangers seem to multiply daily.

When the twins Turquoise One Who Changes and White Shell One Who Changes heard what was needed, they did not hesitate to volunteer. The first twin went to the fields below and protected the seeds as they grew. It was mostly boring work, so to keep occupied they began to braid dried stalks together into baskets and invented what we all know today as weaving.

The other twin had to run far up into the mountains, past where the great beaver dam had been destroyed. This twin kept the headwaters clear all season long. When they got bored, this twin formed the muddy river bank clay into the first pottery.

When it was time to harvest, both twins came back to the village and told The People about their new inventions. Learning from the twins how to make pottery and weave baskets, The People were able to store enough grain and carry fresh water to be comfortable all winter. Without the baskets and pottery invented by the twins Turquoise One Who Changes and the White Shell One Who Changes, our ancestors would not have survived.